Every interaction leaves a trace. That's why our language really matters.

When I was a kid, I wasn't that bright at school, but I could swim like a fish and dive like a shovel.

I swam for a club, trained three times a week and with galas on Saturdays, I was kept out of mischief... I was only 10.

We used to support a local charity. Wrestling was all the rage in the 'swinging sixties'. The parents at the club had a genius fundraising idea of auctioning handkerchiefs signed by the popular wrestlers of the day; Mick McManus, Jackie Pallo, Les Kellet and the like.

They raised money for what was then known as the Spastics Society. Nowadays, the term 'spastic' is of course, rightly regarded as an offensive old-fashioned term for someone who has cerebral palsy.

In 1994, the Spastic Society changed its name to Scope.

As a teen, I would stand behind the goal at Loftus Road, cheering on Queens Park Rangers. Lots of good-humoured banter goes on at football. Gerry Francis was a great hero and was once skipper of the 'Super Hoops'. Gerry was affectionately nicknamed 'geri-atric'. All footballers have playful nicknames.

Geriatric was once used in the medical field as a noun meaning an older or ageing person. Nowadays, that kind of demographic labelling is generally considered inappropriate.

Although the British Geriatrics Society, known as BGS, is still around, describing someone as 'geriatric' is frowned upon and is no longer considered respectful.

Recently, I attended the eye clinic as part of my annual routine of diabetes health checks.

You have four procedures on a typical eye screening day to enable the consultant to carry out a thorough examination:

There was an amusing exchange when the nurse first greeted me for the 'vision test' to check my personal details. 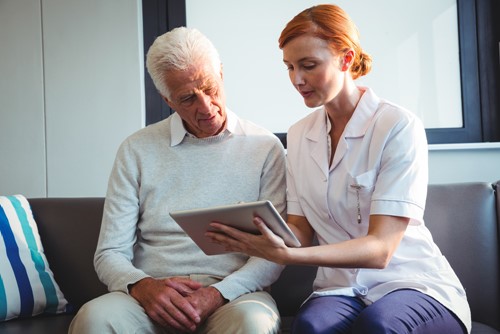 Nurse: "and you're diabetic"

I say "No, I'm not diabetic. I just have diabetes."

Nurse (now laughing): "so you are diabetic!"

I say "Why do you call me diabetic?"

Nurse says "Because it says so in your notes!"

We both then had a good giggle, and the nurse says in closing "ok, I get it, I will change"

Ironically, even the clinic is named 'Diabetic Eye Screening'.

Next time you're tempted to call someone diabetic, why not pause and think...the person in front of you either has or lives with diabetes.

Every interaction leaves a trace. That's why our language really matters.

For more information about language and diabetes, please visit the NHS language matters position statement with tips and advice for talking about diabetes

Charlie has Type 2 Diabetes using insulin for the last 15 years. He is a volunteer, fundraiser and speaker with Diabetes UK.  This year he was appointed Ambassador for the One Million Step Challenge.  Charlie is also a Diabetes Champion in the London Clinical Network. In addition, Charlie is Chairman of Cannon Lane Pre-school in his home town of Pinner.