Carbohydrate counting is often used by people using bolus insulin (usually for type 1 diabetes) to more accurately estimate their meal time insulin doses. It is useful for people with type 2 diabetes to have an awareness of the carbohydrate amount in food, particularly if they are on regular insulin injections.

The impact of carbohydrate on blood glucose

Carbohydrate is a nutrient that is an important source of energy.

All carbohydrates when digested are broken down into glucose which then enters into the bloodstream. When insulin is available the glucose is carried into the body’s cells to provide energy. 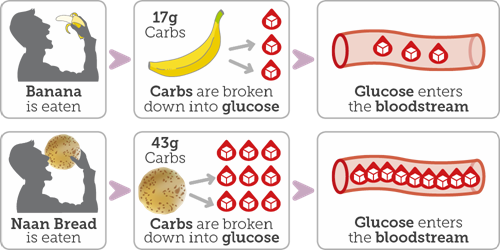 The rise in blood glucose from carbohydrates will depend on the following factors:

The role of carbohydrate counting in management of blood glucose

To achieve ideal blood glucose control, the amount of carbohydrate eaten needs to be balanced with the amount of bolus insulin taken. There are two ways to approach this:

Understanding and implementing the principles of carbohydrate counting will assist in keeping blood glucose levels as near to normal as possible.

The approach used will be influenced by the insulin regimen administered (the type and amount of insulin taken).

Insulin used twice daily may contain a mixture of shorter and intermediate acting insulin e.g. Humulin M3; Novomix 30 and is taken twice a day at breakfast and evening meal. Individuals who are on this regimen, are unable to adjust their insulin, but carbohydrate counting can be applied to maintain similar amounts at meals.

The first step in the process is to identify all items that contain carbohydrate.

There are various resources which can help, these include:

Next, it is necessary to work out the carbohydrate content of all foods and drinks consumed.

The total carbohydrate content of the above lunch is 80 grams.

As every 1 CP contains 10 grams of carbohydrate, calculating the total amount of carbohydrate in grams allows for the CP content of the meal to also be established:

The above lunch of 80 grams of carbohydrate is equivalent to 8CPs.

To work out the bolus dose, you will need:

3. When you know your ICR and have worked out the carbohydrate content of your meal, as the example below illustrates, you can calculate the amount of bolus insulin you need.

When you feel confident in this approach you should be able to:

As you must be able to accurately calculate the amount of carbohydrate you eat and drink before adjusting your bolus dose, a carbohydrate log can help you demonstrate this.

It can also be useful to record a detailed diary which outlines carbohydrate eaten, blood glucose, activity, bolus and basal insulin.

An online resource which will provide additional information on the key principles of carbohydrate counting and insulin dose adjustment BERTIE has been developed by the Bournemouth Diabetes Team.

Carbohydrate counting and insulin dose adjustment is a complex process. Before implementing this strategy, it is important to have the support and guidance of your diabetes care team.

Join others and come along to learn more

This visual book contains 1,700 food photos, showing the fibre content for each portion to help you achieve your 30g fibre each day, as well as carbs, calories and other nutrients

If you’re from an African, Arabic, Caribbean or South Asian background, this book helps you understand the carbs in the food you eat. Its visual style makes it easy to select portion sizes.